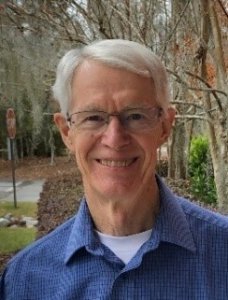 Terry Hill originally hails from southwest Missouri.  After a BS degree in Economics from the U. of Missouri, his graduate school stint was interrupted (and traded) with Officer’s Training School. After serving as a USAF Captain, he left the military for a varied career in finance. For over twenty years he worked as a Controller for retail establishments, like Sears, and then he managed the corporate finances of mid-size lumber establishments all over America, moving at least 7 times.  After his last Chief Financial Officer stint, he did financial consulting for places like Home Depot, Best Buy, Target, and others. This was followed by his own “Factoring” business that continued until 2015.

Terry’s interest in the natural world has been constant, having been a member of the Appalachian Trail Club and the Benton McKaye Trail Association during his Georgia time.  Shortly after retirement to the Lowcountry, he graduated from the SC Master Naturalist course.  This was followed by the Master Gardener course and then Certification.  He and his wife now raise money for horticulture scholarships consulting with homeowners.   He’s also a member of World Affairs Council on HHI, OLLI at USCB, and other charitable organizations.