Beaufort County’s Rural and Critical Land Preservation Program (RCLPP) opened strong in 2018
with its January 22, 2018 presentation and publication of “The Economic Benefits of Parks, Trails
and Conserved Open Spaces in Beaufort County, SC” report by the Trust for Public Land and ended
the year with its fifth successful bond referendum as Beaufort County voters convincingly
approved $25 million in continued funding for this long-running and successful program.

Program goals for 2018 included acquiring continued funding for the program, protecting high
priority targets as identified by the 2014 Greenprint Map and building significant conservation
areas by purchasing land adjacent to or in close proximity to previously protected land. The work
accomplished throughout 2018 furthered these goals.

The RCLPP Board welcomed two new members in 2018: Beekman Webb (District 2) and Douglas
Koop (District 5). Currently the District 1 and District 8 Board positions are vacant.

The Beaufort County Open Land Trust (BCOLT) staff considered forty-seven (47) properties (some
inquiries, some proactively pursued) in 2018. Thirty-two (32) of those properties did not meet the
criteria for the program or the landowners were ultimately not interested in pursuing the funding
offered for their property or development rights. Four (4) properties were brought forward for
purchase consideration to the RCLPP Board and three (3) of those projects were recommended for
purchase to the Natural Resources Committee of Beaufort County Council. One project (Whitehall
Park) was brought forward by the Natural Resources Committee without a recommendation from
the RCLPP Board. All four projects were ultimately approved for purchase by County Council, two
closed in 2018 and two projects are currently set to close in early 2019.

Two relatively small but strategically important parcels were purchased and closed through the
program in 2018, one in the mid-County greenway corridor and one in northern Beaufort County. 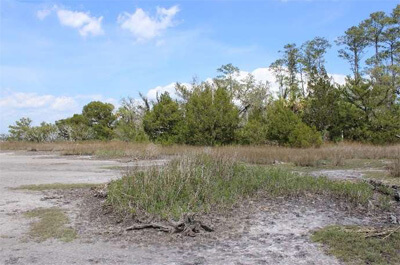 This 4.16-acre marsh island is located in the mid-County greenway corridor of Beaufort County and adds to the mosaic of other properties in the Rural Critical Land Program inventory, including the Jeter Tract (25 acres), Manigault’s Neck (72 acres), Cool Heart Springs (82 acres), the Chechessee Tract (44 acres) and Okatie Marsh (98 acres).The Island is unimproved land with the characteristics of an isolated hummock of high ground surrounded by salt marsh and is bounded by the marshes of the Chechessee River on the north and west and by southbound SC Highway 170 (an SC Scenic Byway) on the southeast. Long-term conservation efforts by conservation groups and Beaufort County through the Rural & Critical Land Program have invested in the protection of these highly visible roadway buffers and ecologically sensitive lands in order to protect the important character of this transition zone between the northern and southern parts of the County.

The purchase of this property in a $44,000 bargain sale transaction protects the water quality on the Chechessee River, a high profile economically important waterway and outstanding resource water (ORW) and preserves this small but important hummock island maritime forest habitat and salt marsh for wildlife.

The 20-acre Whitehall parcel, located in the City of Beaufort on Lady’s Island with its majestic live oaks and high visibility from US Highway 21, the City of Beaufort and the Intracoastal Waterway on the Beaufort River, was a highly sought-after development target for decades. Several Rural & Critical land protection projects had been proposed over the years with no success. In February 2018 over community opposition, a conceptual masterplan for Whitehall was approved by the City of Beaufort, allowing residential, commercial and mixed-use development on the property. In July 2018, the Program Administrator initiated a final effort to purchase a portion of the property for public use. An agreement was negotiated to purchase 9.72 acres of the waterfront portion of the property for $5,450,000, with cost-share funds of $1,000,000 from the Felburn Foundation, $50,000 from the Open Land Trust, and $29,000 in public donations. The seller of the property offered valuable in-kind services toward the planning and development of a passive park at Whitehall. The public strongly voiced support for the purchase of Whitehall, and Beaufort County Council unanimously approved the project. In October 2018, the Whitehall purchased closed and a conservation easement was granted to BCOLT, ensuring that Whitehall will remain in its natural condition in perpetuity.

In 2017, BCOLT staff and several key members of the RCLPP Board collaborated with The
Trust for Public Land’s Conservation Economics team on the development and highly
anticipated publication of the “Economic Benefits of Parks, Trails and Conserved Open
Spaces in Beaufort County, South Carolina” report which was released on January 22, 2018.

March 27-29, 2018: Telephone Poll Conducted
A telephone poll was commissioned by The Trust for Public Land to survey Beaufort
County voters regarding their support for a bond referendum to fund land conservation
through the RCLPP. A random sample of 400 likely voters were interviewed, and more than
two-thirds of likely voters indicated that they would vote “Yes” if the election were held
the day of the interview for a ballot measure that would fund land preservation through a
$50 million general obligation bond.

April 12, 2018: $50,000,000 Bond Referendum Referred to Natural Resources Committee
Will Abberger from TPL presented the results of the feasibility report and the telephone
poll to the RCLP Board at the April 12 meeting. The RCLP approved a recommendation
to the Natural Resources Committee of County Council to pursue a bond referendum of
$50 million with an amount not to exceed 15% going towards park infrastructure.

April-May: $25,000,000 Bond Referendum Referred to Ballot
The bond referendum was amended by the Natural Resources Committee to allow that
up to 20% of the funds could be used toward park infrastructure and was approved at
the April 23, 2018 Council meeting. At the second reading on May 14, the bond amount
was reduced to $25 million and the referendum was approved to move forward.

At the third reading of the bond referendum ordinance on May 29, County Council
unanimously recommended authorizing the placement of a question on the official
ballot for the November 6, 2018 election authorizing Beaufort County to issue General
Obligation Bonds in an amount not to exceed $25 million to acquire lands for
preservation with an amount not to exceed 20% going towards park infrastructure.

The Beaufort County Open Land Trust looks forward to its continued partnership with Beaufort
County protecting the natural resources and open space that make this County a desired place to
live and work. For additional information regarding the information in this report, please contact
Barbara G. Holmes, Program Administrator at (843) 521-2175 or barbara@openlandtrust.com.